"We are very grateful for those who have invested their time, talent, and treasure to make Newark a model of progress. We appreciate the leadership of our city by Mayor Hall, his administration, and our city council and we are excited about the renovation of the Historic Arcade"
~Daniel DeLawder, Board Chairman

With the support of a patient and loyal group of donors, Newark Development Partners (NDP) purchased the 110-year-old Historic Downtown Newark Arcade on November 22, 2019. NDP realized the importance of obtaining and revitalizing the Arcade for the betterment of Downtown Newark’s vibrancy and economic growth.  The Arcade had physically deteriorated but is now cleaned up and ready for a historic renovation.

The city-block-long Newark Arcade, once known as the Arcade Mini Mall, is located between Third and Fourth Streets in Downtown Newark. It was formally opened on June 7, 1909, and was one of only eight glassed‐in shopping centers in Ohio. The original space was a collection of livery stables, buildings, and storage sheds.  Arcade Realty Company, a group of distinguished businessmen that included Carl Weiant, Francis Kennedy, Charles Spencer, E.T. Rugg, and Harry and John Swisher, built the original Arcade. It was designed by Columbus architect Carl E. Howell, of Howell & Thomas Architecture and E. K. Hoban was the General Contractor.

Originally, the Arcade was built for twenty‐three stores, and at one point, thirty businesses occupied the space. In its early years, the Arcade was known for more than its businesses. It had a beautiful fountain, the Arcade Theater, and was rumored to have a speakeasy on the second floor as well as poker parties in the basement. The fountain and theater are no longer there but the Arcade still houses a few local businesses. The 3rd Street, or east side of Arcade, consists of three stories; with apartments, offices, and ground-level commercial stores. The 4th street entrance only had two levels. Both the 3rd and 4th Street original construction remains intact. The “South Annex” was subsequently constructed, consisting of two levels, for similar purposes mirrored the original layout of the 4th Street construction.

The basement level originally housed a cold storage area under the Arcade as well as a heating unit. This was considered a great asset to the city at that time. The 4th Street entrance led to the cold storage areas. The first room was kept at 10 degrees above zero, the second room was 25 degrees and the third room was kept at 36 to 40 degrees. There was an electric freight elevator located at the mid-point of the current Arcade to carry freight to the basement for the tenants. In its prime, The Arcade was full of life. Children played around the fountain (removed decades ago) and orchestras played from the balconies overlooking the Arcade, filling the area with music. Dances were a regular occurrence except for Sundays.

Over the years, the Arcade has housed a variety of retail businesses including clothing, meat, cheese, restaurants, bars, and artists. One of the first newsstands to open in the Arcade was that of Gordon Kinney. He purportedly sold 4,000 different magazines. Kinney was 21 years old when he ran the business, one of the youngest businessmen of his time. Individuals who remember the Arcade during its vibrant years miss the shops and the various events they enjoyed. “Locals” have their own special memories of the Arcade. 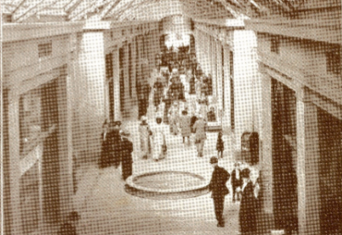 Newark Development Partners goal is to bring the Arcade back to its original shine and energy. The Arcade revitalization will add enormous economic benefit, pedestrian traffic and commerce to the Downtown. It can provide a permanent home for the winter farmers’ market. The community icon can return to life and be a main focal point of the Downtown.

NDP is working with Schooley Caldwell Architecture and Northpoint Architecture on this enormous project. The objective is to do it right and bring The Arcade back to its original luster with the flag pole, parapet wall, arched window designs, front window displays sections and refurbished façade on the east side. By restoring the Arcade and bringing these historic features back to life, we intend to apply for Federal and State Historic Tax credits which will help fund this project.

Because of the clear demand for Downtown market rate housing, plans are being developed for 18 units ranging in size from 541 SFT to 790 SFT, featuring 11’ ceilings, stainless steel appliances, solid surface countertops and solid cabinets; one additional unit is 257 SFT and will be used as a short term corporate suite. The commercial aspect of the Arcade will showcase tenants featuring potential ice cream, restaurant and other stores utilizing the center common area for entertaining. The balconies on both ends will be available for bands and music so some of the “old time” life can return!

NDP is committed to bringing The Arcade back to be a viable economic foundation for Downtown Newark. Taking advantage of potential state and federal tax credits combined with continued generosity of donors who share the vision of NDP will make this critically needed project a reality.